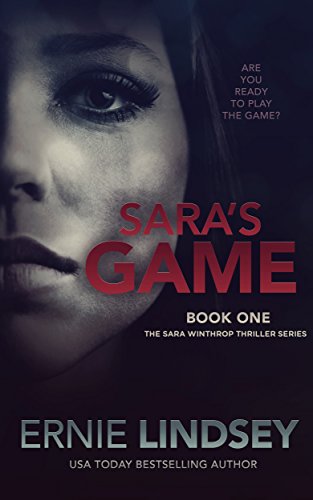 Sara’s Game is a psychological thriller to be sure, with all the twists and turns one expects from such a book.  Sara works for a successful gaming company that is in the process of releasing game III of a very sought after game series.  She has a wonderful assistant, Shelley, who helps her out not just at work but with the three kiddos as well. Sara also has to deal with the boss’ son, Teddy, who is a egomaniacal jerk.  Sara’s husband disappeared a couple of years ago and she is doing everything she can to maintain a stable environment for her middle school twin girls and her elementary school son. Sara is certainly missing her husband and struggles to figure out what in the world happened to him but life is basically good.

One morning after a frustrating meeting with Teddy in which she has to force him into actually working, she gets a call from her son’s Principal that she is needed at the school immediately.  Grabbing her purse and running out the door to her car, she discovers a note on the windshield that says: “Are you ready to play the game?”. Upon arrival at her son’s school she discovers that he is missing.  She forces the school secretary to call the police and joins the principal and other staff members on the grounds of the school to search for her son. It is there that she receives another call telling her that her daughters are missing from their school.

The game has begun.  Sara must follow the rules of play in a three level game.  In theory, if she makes it through all three levels her children will be released.  Each game level has a theme with the first being humiliation. Who is running this game?  Where are her children? Can the police help her? Fortunately Lindsey is a writer that gives you all the answers, whether they are good or bad.  I finished reading being glad I was not Sara. This is a quick easy read that will keep your attention throughout the story.