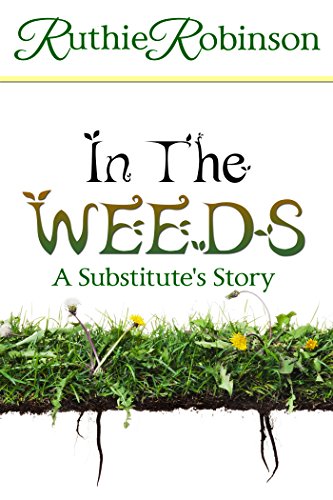 Ruthie Robinson has done it again!  In the Weeds: A Substitute Story is a thought provoking story.  Rarely do I come across a novel that forces me to a new level of understanding as this one did.  The story centers arounda white man, Caleb Jones, and an African American woman, Nakia Nobles, who fall in love the moment they meet.  Nakia however has a strict rule she is not willing to bend on – she will only marry another African American.

Robinson is a self described romance writer and she definitely delivers on the romance but to simply say romance is to greatly underestimate her writing abilities.  Nakia and Caleb have a great romance and there is plenty of steamy scenes as well, however, Robinson takes on racism in a way I have never read about before. The story is extremely disturbing, because the idea of not treating humans as humans goes against everything I know.  I have never had an easy time reading about racism because it never made any sense to me. Having said all of this, I want you to know that I have a list of people that I want to read this book. I believe that it has the possibility to do for racists what the movie “Scared Straight” did for juvenile delinquents.

In the story, Nakia and Caleb wake up in an alternate reality where whites are the Weeds (not even considered humans) and all other people are called the Others.  We all know of our country’s dubious history with Native Americans, African- Americans and Immigrants but Robinson turns the tables. The Weeds are not to look the Others in the eye, not to speak unless spoken to, can not go anywhere without being tracked thanks to implanted tracking devices and it gets worse and worse.

Read this book.  Share this book. Understand that recognizing that we are all humans and of one race is essential for the growth and well being of our country as well as ourselves.  In the end give a big thanks to Ruthie Robinson for writing the hard stuff that makes us think! Long live romance authors!

One thought on “In The Weeds: A Substitute’s Story by Ruthie Robinson”