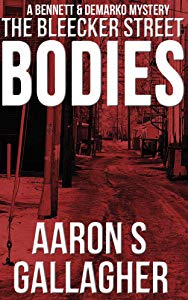 This is my second read in the Bennett & DeMarko series by Indie Author Aaron S Gallagher and I am really enjoying them.  The series is set in New York City and, more specifically, in DeMarko’s (Harry’s) neighborhood. Being an ex-NYPD officer now turned Private Detective, DeMarko is prone to keeping his home turf safe and for him this means safe for everyone.  Harry is a fabulous mixture of tough and caring, for example, it is never ok to hit a woman; any woman, not even a hooker. He simply will not stand for it. Bennett (Toni) is a hooker who friends Harry and the two begin to share a life.

Harry has a group of friends he plays poker with twice a week, some are neighbors and some are NYPD cops.  He has built up a strong network of friends that make his job easier. He has morals and values that are unique given his circumstances.  Toni is a little rougher but she sees the good in Harry and wants to be a part of it. Together they create a balance that works well for a crime solving team.

In this first book in the series, there are dead hookers showing up in the streets of Harry’s neighborhood.  The police are not going to put a lot of effort into finding the killer, so a friend of Harry’s on the force asks Harry to help him out with the investigation.  Harry will find the killer because, to Harry, life is important and the search becomes serious for him.

These stories have a remarkable feeling of reality and a glimpse into what real detective work looks like: Pounding the pavement, asking questions, following leads, and making connections.  It’s rough, it’s dirty, and sometimes you get hurt.

Try one of the three in the series.  I simply cannot imagine that you will not enjoy them all.