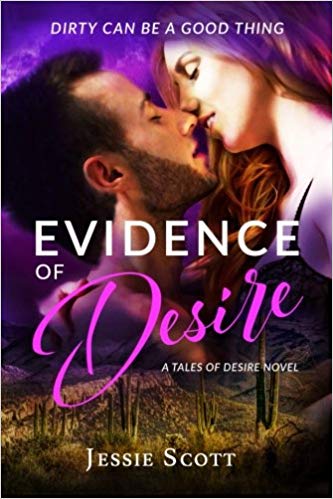 Evidence of Desire is a romance novel, written by Texas author Jessie Scott.  It is in fact a steamy romance novel, certainly not for the faint-hearted. And yes, there is the mandatory happily-ever-after ending, however the romance is complicated and realistic and, as in real life, there is great love even when life takes tragic turns.

Stevie Daniels (the main character) is an empowered, brave and courageous woman, who knows what she wants out of life and is not going to settle.  She is a dedicated career driven woman with her eyes on the prize. Stevie has plans; become supervisor in a male dominated field, find a husband who is both lover and friend, have children, and be as successful as her brothers, maybe even better. Professor Vince Vasher is a serious, dedicated scientist.  He is rather shy and not particularly great with people. His hobby is studying and collecting reptiles.

Stevie and Vince meet at work and life gets crazy.  There is atomic-level chemistry, but it is work so they deny it.  When Stevie is ordered to observe and report on Vince’s supervisory skills the tension really rises and Stevie is left struggling with how to handle it.

Intertwined in or Interwoven into the relationship is the fact that they both work in forensic science and help solve crimes.  There is a serial killer on the loose and it will take both of their skills to solve the crime. The action involved, the thrill of discovery through science and the frustrations to end the killings are all included.

Jessie Scott has managed to write the perfect romance.  Some hot and heavy sex, real struggles in the real world between characters that that could definitely be people you know.  She does an amazing job of creating the modern woman who is in fact strong and vulnerable at the same time, who manages to be true to herself and knows her self worth.  In addition, the mystery of solving the murder provides added suspense and excitement to the story. You will not be disappointed!

One thought on “Evidence of Desire by Jessie Scott”