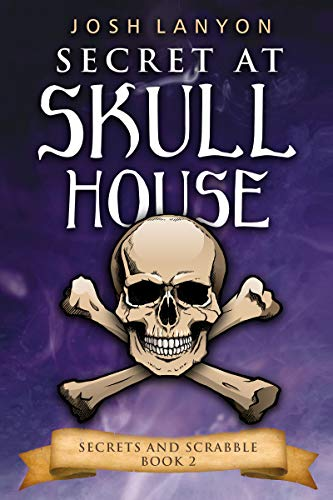 If you follow my blog, you know that I love pirates so naturally, a book about a mansion called Skull House located in Pirate’s Cove is going to catch my eye, but I am pleased to say that it is a well written, solid murder mystery (complete with haunted house) that keeps you guessing who the killer is throughout.  Even though this is the second in a series it works great as a stand-alone read.

Ellery Page is done with his acting career so inheriting his great Aunt’s mystery bookstore in the small coastal town of Pirate’s Cove is a great way to start a new life.  The town is welcoming and Ellery has joined the Scrabble Club, the Theater Club, and the Silver Sleuths Club in addition to renovating his Aunt’s historical mansion and keeping the Crow’s Nest Bookstore open.

When Ellery finds out that his ex has bought the oldest house in the town and is planning on living there he is less than happy.  There is a lot of history between them, not to mention the fact that they have not seen each other in years.  But Ellery can’t stay too focused on that because the local theater is putting on a play he wrote and as they say “the play must go on.”  Shortly after arriving, Ellery’s ex asks if they can meet for drinks, but when Ellery is stood up, it is all too much and Ellery decides to drive out to Skull House to see why his ex never showed up.

This is a mystery that cannot be solved without first solving a 20-year-old mystery.  Lanyon’s story set up is intriguing and certainly keeps you searching for clues as to what happened then and how it impacts what has only recently happened.  With the pushy help of the Silver Sleuths, an honest Sheriff, and a little luck, Ellery solves both mysteries.