ALL THE COWBOYS AIN’T GONE

All the Cowboys Ain’t Goneis the rollicking adventure story of Lincoln Smith, a young Texan living at the beginning of the twentieth century, who thinks of himself as the last true cowboy. He longs for the days of the Old West, when men like his father, a famous Texas Ranger, lived by the chivalric code. Lincoln finds himself hopelessly out of time and place in the fast-changing United States of the new century. When he gets his heart broken by a sweetheart who doesn’t appreciate his anachronistic tendencies, he does what any sensible young romantic would do: he joins the French Foreign Legion.
On his way to an ancient and exotic country at the edge of the Sahara, Lincoln encounters a number of curious characters and strange adventures, from a desert hermit who can slow up time to a battle with a crocodile cult that worships the god of death. He meets them all with his own charming brand of courage and resourcefulness.
Purchase: Bookshop.org 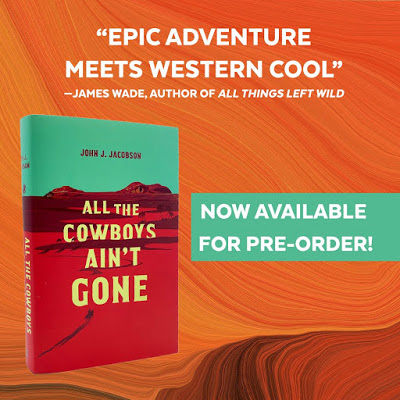 The is a combination of a coming of age and a tall tale of Texas proportions that deals with a refusal to change and the allure of adventure.  Lincoln Smith grew up in Texas with a father that died a heroic death as a Texas Ranger, a Mother who saw to it that he was educated in Latin, Shakespeare, and received a classical education while reading great adventures in dime Westerns.  After a brief stint in college, Lincoln realizes that he just cannot adapt to modern life and decides to join the French Foreign Legion.  This story is his tale of adventure.

Jacobson does an amazing job of creating characters that fit the story.  As odd as this sounds it is not the norm for an author to be able to develop a character that is stubborn, actively angry at the development of modern machines like trains, can quote Shakespeare, is a perfect shot, a gentleman, and lusts for thrilling experiences. Jacobson does this with such flair that the reader not only believes wholeheartedly in Lincoln but joins Lincoln in the unfolding exploits.   This is certainly an “I cannot wait to get back to reading” novel.

You too can join Lincoln as he moves from the prairies of Texas, to demonstrating horseback riding tricks and shooting techniques in a Wild West Show, and then traveling across the world to the country of Mur.  You too can join him as he meets treasure hunters, Princes, Kings, and Assassins with scimitars.

The adventure is calling!

Though John J. Jacobson didn’t join the French Foreign Legion after being jilted by a girlfriend, or over his displeasure of missing the last great cattle drive, he has, borrowing Churchill’s phrase, lived a rather variegated life. He was born in Nevada, grew up in the West, surfed big waves in Hawaii, circled the world thrice, survived the sixties and seventies, corporate America, and grad school. Among other degrees he has an MA in Renaissance literature from Claremont Graduate University. 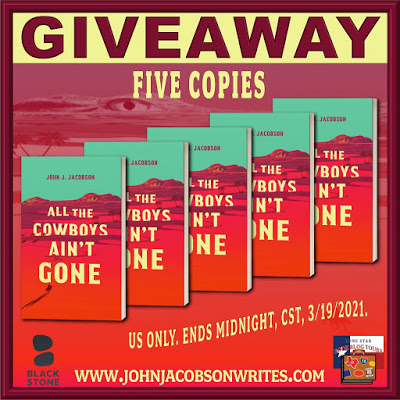 FOR DIRECT LINKS TO EACH POST ON THIS TOUR, UPDATED DAILY,

or visit the blogs directly:

2 thoughts on “All The Cowboys Ain’t Gone by John J. Jacobson”