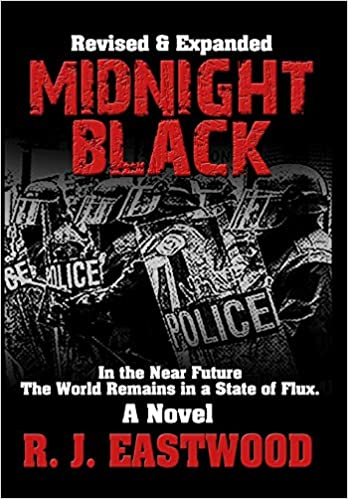 Wow!  Wow!  I was given a copy of the newly revised and expanded edition of tis book. Eastwood has written a very provocative novel.  Given our country’s political climate of the last four years, I am tempted to label this book a horror story but if nothing else it will definitely make you take a serious look at what you want your government to look like and how you view freedom.  The book is wonderfully written and keeps you on the edge of your seat longing for a good ending or at least an ending that provides some type of hope.

Billy Russell was a successful narcotics officer when his wife was brutally murdered.  Unfortunately, Russell did not handle her death well and when he executes the murderer in cold blood the government comes down hard on him.  He is sentenced to 20 years of hard labor in a totally isolated environment with no contact at all with the outside world.  After 17 years, he is suddenly paroled, transported to Arizona, given an apartment and a job as a narcotics officer, all without any explanation.  He is told by everyone he meets that the world has changed and with each step of his journey back into the real world he discovers that the changes are not for the better.

It is a great read, but I warn you it left me stunned, scared, and thinking that we need to change our immediate priorities.  The most pressing issue we have is the lack of education our population seems to have in the subjects of forms of government, what government is for and what freedom looks like.  I can not help but think that securing a higher level of education in these areas would prevent Eastwood’s story from ever coming true.  Wow!  Powerful writing!

One thought on “Midnight Black by R. J. Eastwood”