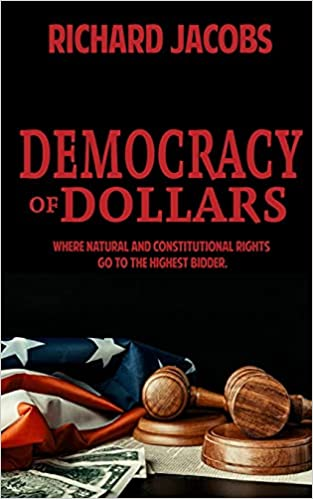 Democracy for Dollars takes a very different look at the issue of greed in America.  Jacobs looks at the issue from the standpoint of the judicial system. In it Jacobs states that there is in fact a serious problem with our legal system.  We have all read for years about special interest groups paying politicians for their votes and we know that is an issue, but do we understand that the very rich are using their money to control the way America is run?  Jacobs, a former lawyer, makes it clear that the Judiciary branch of the government was never supposed to become a political entity and was set up to serve as a system of checks and balances for the other two branches.

Unfortunately, it seems that many people in our country have forgotten the basics we were all taught in high school civics or government classes.  Jacobs does a terrific job of reminding people of the way our Constitution was set up without being preachy.  The scary part is how many people know and understand that America has lost its way by allowing the almighty dollar to usurp our form of government, which is in fact the very thing that  made our country great.

It has always been our form of government that made us great and not the fact that people could make more money than anyone would ever need or want.  It certainly has never been great because we got so complacent we now allow the very wealthy to run our country without any form of accountability.  Jacobs makes it clear that the issues affect each and every person living in our country.  Personally, I believe everyone should read this book.  In my life, I do not know of a single person that thinks our government is operating as it should, regardless of which political party they claim and most thought that their vote 5 years ago was a demonstration of the need for change.  Something has to be done, so please take the time and read this book.  You will not only be thankful you did but it may just be the last step in bringing about a much needed paradigm shift.