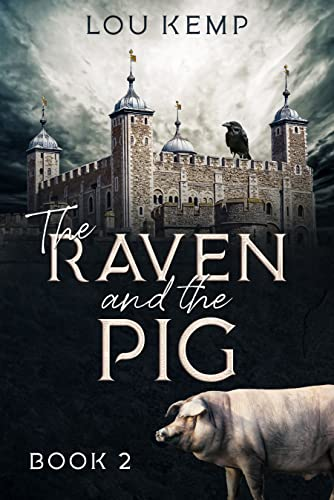 In the continuation of the Celwyn series, Lou Kemp has succeeded in making the second book even better than the first.  Bartholomew and Kang are by Celwyn’s side once again, as are Captain Nemo and Jules Verne.  Kemp brings Celwyn’s half-brother into the story, adding significant tension and humor between the characters.  I found it hard to decide if Pelaez was a friend or foe.

There are a couple of plot strands that contribute to the exploits. The first is that Celwyn has been wounded and Pelaez is the one keeping him alive until they can get him to Thales, an immortal healer.  The second is a flying machine that Captain Nemo, Kang, and Bartholomew are working to build and the third is that they are being hunted.  The group is trying to protect the flying machine from both the Mafiosa and the warlock Duncan.  Fortunately, Celywyn has had conflicts with Duncan before and is able to use his knowledge in a confrontation.

The Raven and the Pig works well as a stand-alone novel, but why prevent yourself from a truly marvelous reading experience?  Lou Kemp is one author I have no problem encouraging you to read everything she has written