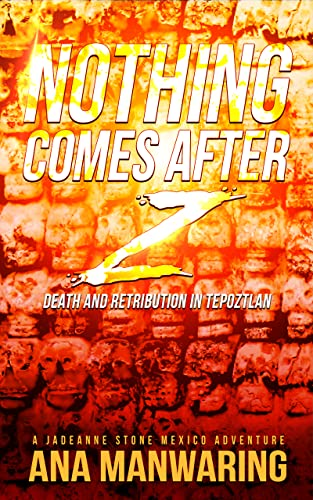 The excitement continues in this, Manwaring’s third novel in the JadeAnne Stone series.  We find JadeAnne stuck in Mexico.  She had been helping Senator Aguirre find Lura’s killer when she found herself involved with a human trafficking ring.  Living with her father she has only known for a few weeks and the little girl, Lily, whom she saved from the traffickers, JadeAnne is not only trying to get her life back together but is also trying to get Lily legally home to California.  Getting back into her daily schedule with running, she meets a gorgeous Doctor, and against warnings, begins dating him before he is vetted. Unfortunately, Anibal, the man who attempted to sell her into a trafficking ring, might not be dead.  The fear is real, but the determination to save Lily wins out.

How is Anibal still alive?  Can they take down the human trafficking ring if the Senator’s family is involved?  How is she going to deal with a protective Dad she has only known a short time?  Then there is the ever mysterious housekeeper, is she a spy but how can she be when she is so nice to Lily?  Manwaring has done it again with her third novel, leaving the reader on the edge, not knowing what will happen, and hoping that both JadeAnne and Lily can make it back to the States in one piece.  On top of everything, it becomes clear that the traffickers are after Lily, JadeAnne, and Pepper.  This novel is exciting, nerve-racking, and full of action, with a female protagonist that will knock your socks off.

One thought on “Nothing Comes After Z by Ana Manwaring”